More sidewalks on the way for Hoover 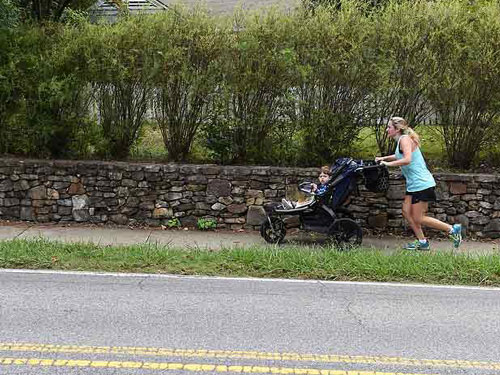 17 May More sidewalks on the way for Hoover

Posted at 19:02h in Home, News by jradmin
Share

The city is planning to build more sidewalks in the Bluff Park community and other parts of Hoover.

The Preserve subdivision in Hoover is now a step closer to having a new sidewalk in the community.

The Hoover City Council recently approved a construction agreement with the Alabama Department of Transportation for a 1-mile sidewalk along Preserve Parkway between Sulphur Springs Road and the Preserve Town Center.

The sidewalk will be on the north side of the parkway, next to the 350-acre Moss Rock Preserve nature park.

ALDOT is expected to seek bids for construction of the sidewalk in December, said Tim Westhoven, assistant executive director for the city of Hoover. Construction likely will start in the spring.

Construction and engineering for the sidewalk is expected to cost about $270,400, with the federal government picking up 80 percent of the tab ($216,320) and the city of Hoover paying the other 20 percent ($54,080), according to the construction agreement.

This is only one of about a dozen sidewalk projects planned in Hoover right now.

Construction is already underway on a 1,100-foot sidewalk on Hackberry Lane between Queensview Road and Running Brook Road. It will connect with an existing sidewalk that extends to Blue Ridge Boulevard and Shades Mountain Elementary School. That sidewalk should be completed by January, city officials said.

Hoover also is working toward another sidewalk project in Bluff Park that will include 3,200 feet of sidewalks on Lester Lane and Cloudland Drive near Bluff Park Elementary School. Construction is expected to start soon and should take about 90 days, Westhoven said.

Another 1.4 miles of sidewalks are planned on various streets around Bluff Park Elementary.

Plans for that project have been submitted to the Alabama Department of Transportation for final review, and the city is waiting on environmental clearance and authorization to begin right-of-way acquisition.

“We live half a mile from the school but can’t walk because of traffic on Valley [Street],” Leasure said.

The area behind the school is so crowded with carpool traffic that it’s dangerous for kids walking in that area, Leasure said. New Bluff Park Principal Terry Lamar arranged to have a crossing guard in that area, which has made it safer, but it’s still risky, she said.

It was also dangerous for kids walking to and from nearby apartments off Tyler Road, so the school system arranged to provide a bus for them, even though they live within the 2-mile cutoff for bus service, Leasure said.

It seems the larger Bluff Park sidewalk project is never going to get done, she said. She remembers seeing surveyors for the sidewalk on Valley when her oldest daughter was in the first grade. That daughter is now in fifth grade. Her youngest child is in first grade and “at this point, I don’t think my children will ever be able to walk to school,” she said.

“Everything takes such a long time – bureaucracy at work,” Leasure said. “Government doesn’t feel the urgency of the project like the rest of us.”

Hoover Mayor Gary Ivey said most of the sidewalk projects in the city use federal funds and therefore involve cooperation between the city, state and federal governments. The city must get state and federal approval on various aspects of the projects, and whenever that many government entities are involved, there are a lot of steps and it’s a slow process, Ivey said.

Projects wouldn’t take as long if the city handled them alone, but they cost too much, and “you wouldn’t get the projects done,” he said.

The City Council also on Sept. 8 approved an agreement with ALDOT for the city to maintain a planned 1.7-mile greenway from Valleydale Road to the Inverness Nature Park. Much of the greenway will be a sidewalk along Inverness Center Parkway that is 7 to 10 feet wide, but once the greenway reaches the nature park, it will become a 10-foot-wide asphalt trail through the middle of the park, Westhoven said.

The Inverness greenway is a joint project between Hoover and Shelby County and is being managed by ALDOT. About 50 percent of the rights of way needed for the greenway project have been acquired, city officials said.