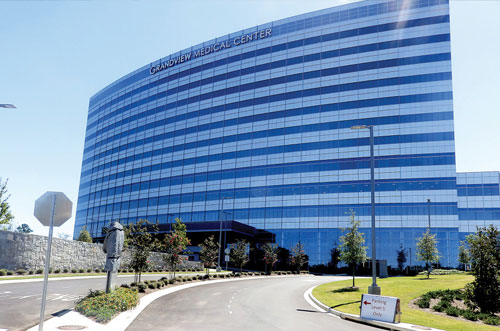 Posted at 18:10h in Home, News by jradmin
Share

The hospital will begin caring for patients at 6 a.m. Oct. 10. Patients will be moved from Trinity Medical Center that day, and once the move is complete, Trinity will close its doors on Montclair Road.

Trinity Medical Center for years fought for approval to move to the new building on U.S. 280 just east of I-459. Construction began on that site for a HealthSouth hospital but later stalled, and Trinity took over the project.

The hospital will help serve areas for which access to the other major hospitals has been inconvenient, Granger said.

Once fully operational, Grandview Medical Center will be a 372-bed hospital offering some of the most advanced technology in the state across its emergency medicine, advanced heart care, maternity, orthopedic, surgical care, diagnostic and general medicine services. Nearly 1,500 employees will work alongside about 400 physicians of various medical specialties.

Granger said the hospital is expected to serve about 200 to 250 patients per day when it first opens and about 350 per day in the next few years.

Ahead of the official opening date, Granger led a media tour through several of the hospital’s 12 floors.

The hospital’s Emergency Department includes 22 private patient rooms and two trauma rooms. The department is a designated Level III trauma center and includes an accredited chest pain center and recognized stroke center. The hospital’s helipad, which is just outside the ambulance entrance, helps get care more quickly for patients who need it most. Granger said the goal is to continue Trinity Medical Center’s record-low ER wait times at Grandview.

In time, the hospital aims to become a leading provider in cardiac care and has equipped its heart care units to include six cardiac catheterization labs and a hybrid operating room featuring both imaging and operating capabilities in a single room.

In the women’s services department, Grandview will be equipped with eight labor and delivery rooms, 22 post-partum rooms and a well-baby nursery to help give new mothers time to rest. Premature babies and others needing extra care can be cared for in one of the 12 private NICU rooms that will help keep mom and baby together.

Among its high-tech offerings, Grandview will be the first in Alabama to incorporate the ACESO patient and clinician communication systems within private patient rooms. Once fully operational, the program will run through a patient’s television screen and provide information such as patient feedback and content about specific conditions, as well as on-demand movie selections. Eventually, Grandview hopes to expand the program to offer patients personalized meal-ordering options.

In its effort to make the hospital experience “more pleasant” for its patients, as explained by Granger, Grandview will be the first hospital in Birmingham and only the second in the state to deploy the ViSi Mobile patient monitoring system with the goal to provide “enhanced patient safety, satisfaction and outcomes.”

In a recent pilot test of the program, Granger said, hospital staff reported the ability to better care for their patients. The system helped alert them of any changes in patients’ vitals in a timely manner. Patient alerts are sent directly to the nurses’ station and their individual cellphones.

The system, which first will be introduced in select areas of the hospital, will monitor patients around-the-clock without the need for routine and middle-of-the-night check-ins. The system also will allow patients to move and walk around the hospital while still being monitored.

Granger said Trinity Medical Center patients will be moved the nine miles from the old hospital to Grandview beginning at 6 a.m. Oct. 10 in a multi-level approach. A total of 35 ambulances will help transport approximately four patients every 15 minutes. The move should be complete by the end of day.

While the move is being conducted, hospital services will be offered at both Trinity and Grandview.

“We have been preparing for this moment for nearly two years and we look forward to finally opening our doors and welcoming patients into this beautiful new hospital facility,” said Granger.

The hospital, at 3690 Grandview Parkway, will host a Community Open House Sept. 27, from 2-5 p.m. For more, visit www.grandviewhealth.com.